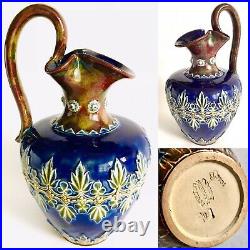 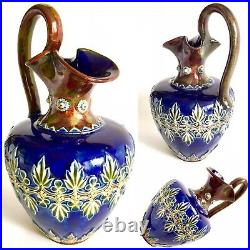 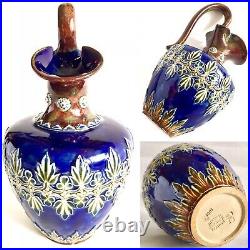 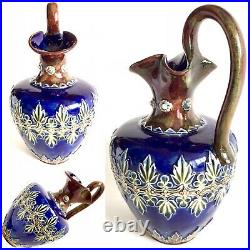 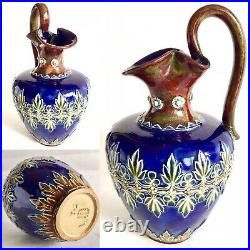 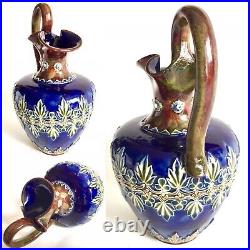 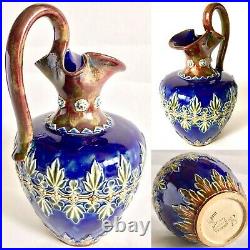 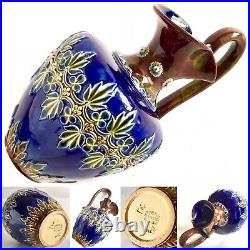 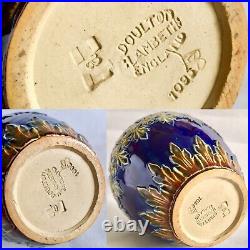 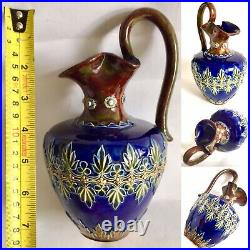 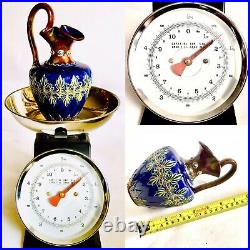 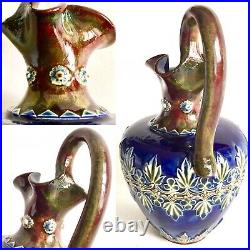 V ery Rare Early Antique Victorian (1890s) English Doulton Lambeth “Florence Barlow” Silicon Ware Ewer / Jug (8/20cm, 650g). Lovely ra re antique ornate British stoneware / silicon ware ewer. Around 130 years old. Lovely condition and whilst it looks perfect it does appear to have had an excellent professional restoration to the handle at some point which is near impossible to notice unless you look for it with a magnifying glass (please study the last photograph carefully). Please browse all photographs attached for size, weight and condition as they are self explanatory. Doulton’s Lambeth studio allowed the decorators to sign or monogram their work, which allows many pieces to be attributed to individual designers, though often more than one person works on a piece. Hannah, after studying at Lambeth School of Art, worked for Doulton from 1871, becoming the first female artist to work there. By mutual agreement, Florence specialised in painting flowers and birds, and Hannah in horses and other animals, which were often incised with a blade, the lines being then coloured and often paint added elsewhere. They sometimes worked together on individual pieces. Hannah died on 15 November 1916 at 46 Binfield Road, Clapham, London. She was buried in Norwood cemetery on 20 November. Her sketchbooks are in the Sir Henry Doulton Gallery, Stoke-on-Trent. Florence started out producing designs very much in the style of her sister, but when Doulton introduced Pate-sur-pate wares in 1878, Florence became a master of this technique. The technique of Pate-sur-pate, a French term meaning “paste on paste”, is described by John Sparkes as the method of decorating one body with another of a different tint. The body (or paste) was mixed with pigment (18 different colours or tints were available) and applied with a brush. To paint with the earthy pigment required a steady hand and accuracy, as each touch with the brush delivered the exact amount needed for the leaf or foliage used, it required much practice and unerring certainty in planting the material on the ware firmly in the right place. In what can be described as her fully fledged style, Florence portrayed birds in their natural habitat, without adopting the Victorian fashion for humanizing her subjects in the manner of her contemporaries. Nor did she attempt grotesque fantasizing. Her designs were generally well adapted to the shape of the vessel, the Pàte-sur-pàte creating a slightly raised effect. Sometimes she modelled the bird in relief before applying the colouring. Like her sister, she generally accepted the convenience of working on a partly decorated piece, confining herself to a blank frieze within which she could invent freely, although a proportion of her work was carried out independent of any decorative bordering, reminiscent of the simplicity of the earlier, purer 1870’s style. Her works are now sought after collector’s pieces. Florence died in 1909. Hannah retired in 1913. She died in 1916 having served 43 years at Doulton and is commemorated in a terracotta panel by her colleague George Tinworth, which is still to be seen over the main entrance to the surviving office block in Lambeth High Street. Works by both gifted sisters are displayed in the Victoria & Albert Museum in London. Royal Doulton Silicon Ware was mainly produced from 1880 to 1912, although examples exist up to 1930. It consists of a very hard high-fired stoneware body in light brown and blue, covered in a barely perceptible matt glaze known as’smear’. Silicon Ware objects are usually decorated with applied beads, rosettes and medallions, sometimes by major Doulton artists such as Eliza Simmance, Florence Barlow and Edith Lupton & Georgina Pearson. Royal Doulton was an English ceramic manufacturing company producing tableware and collectables, dating from 1815. Operating originally in London, its reputation grew in The Potteries, where it was a latecomer compared to Royal Crown Derby, Royal Worcester, Wedgwood, Spode and Mintons. Its products include dinnerware, giftware, cookware, porcelain, glassware, collectables, jewellery, linens, curtains and lighting. Three of its brands were Royal Doulton, Royal Albert and Mintons. These brands are now owned by WWRD Holdings Ltd (Waterford Crystal, Wedgwood, Royal Doulton), based in Barlaston near Stoke-on-Trent. On 2 July 2015 the acquisition of WWRD by the Finnish company Fiskars Corporation was completed. The Royal Doulton company began as a partnership between John Doulton, Martha Jones, and John Watts, with a factory in Lambeth London around 1815. Doulton products came to the attention of the Royal family. In 1901 King Edward VII granted the Burslem factory the Royal Warrant, allowing the business to adopt new markings and a new name, Royal Doulton. The company added products during the first half of the 20th century while manufacturing fashionable and high-quality bone china. The Lambeth factory closed in 1956 due to clean air regulations. Pearson & Son Ltd, a subsidiary of the Pearson industrial conglomerate acquired Doulton & Co. Pearson & Son owned Allied English Potteries and merged operations into Doulton & Co. All brands from Allied English Potteries and Doulton & Co. Including Royal Doulton, Minton, Beswick, Dunn Bennett, Booths, Colclough, Royal Albert, Royal Crown Derby, Paragon, Ridgway, Queen Anne, Royal Adderley and Royal Adderley Floral were moved under the umbrella of Royal Doulton. However in 2005 Waterford Wedgwood completed a takeover of Royal Doulton acquiring all assets and brands. In September 2005, the Nile Street factory also closed. Along with other Waterford Wedgwood companies, went into administration on 5 January 2009. Royal Doulton is now part of WWRD Holdings Ltd. Some items are now made in the parent company, WWRD Holdings Ltd in Barlaston, south of the Potteries Conurbation. Further production is carried out in abroad including Indonesia and Poland. On 2 July 2015 the acquisition of WWRD by Fiskars Corporation was completed including brands Waterford, Wedgwood, Royal Doulton, Royal Albert and Rogaska. The acquisition was approved by the US antitrust authorities. This item is in the category “Pottery & Glass\Decorative Pottery & Glassware\Vases”. The seller is “santoor-uk” and is located in this country: GB. This item can be shipped worldwide.