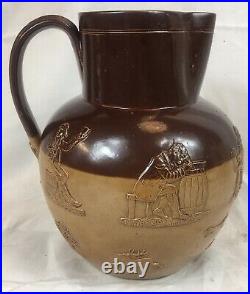 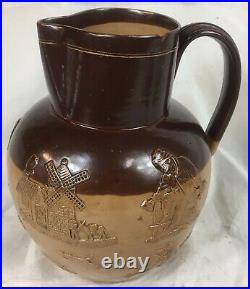 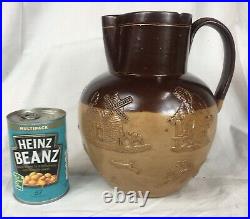 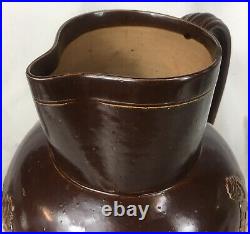 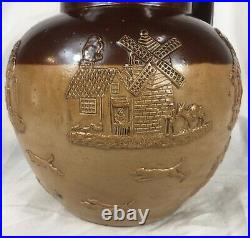 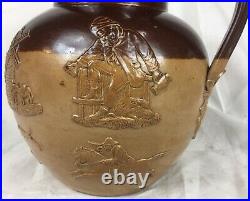 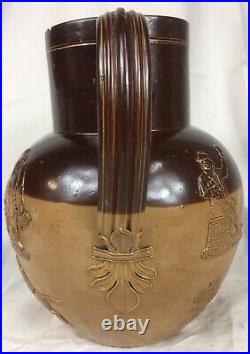 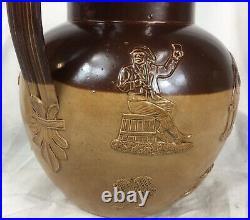 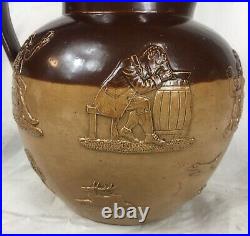 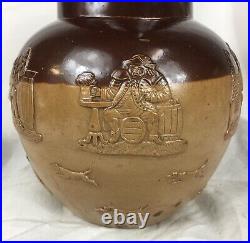 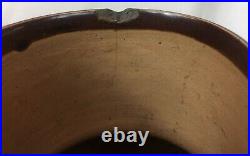 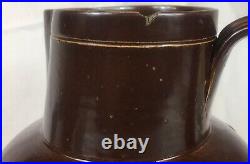 Large Antique Doulton Lambeth, Stoneware / Saltglaze Hunting / Harvest Ware Jug. Marked to the base Doulton Lambeth (used between 1858 – 1910). Particularly large size, 24cm high and 22cm wide in handle approx. Good used condition for age, with wear and marks etc. Plus, historical chip to the lip, with hairline crack leading from it, as photographed, but sound. There were many potteries in the area at that time taking advantage of the river side location to bring in materials and take out the finished goods. One needs to remember that pottery was one of the main packaging materials of the day for anything of a liquid nature. Just think how many bottles were required just for ink to use in every day life in the home and business world, we are talking about production on a vast scale which meant huge profits were to be had. By the 1830’s they had constructed two new kilns and were also producing acid resistant stoneware chemical vessels and architectural terracotta wares such as chimney pots and roof tiles. They also started to produce the hunting ware range which carried on in production into the 1950’s. Henry Doulton (1820-97) joined the business at the age of fifteen. His elder brother, also John was already at the company and younger brother Fredrick was yet to join. In 1846 Henry persuaded his father and younger brother to invest in a seperate company, Henry Doulton and Company also located in Lambeth High Street. The company began to produce vitrified stoneware sewer and water pipes. This was to coincide with a massive rise in demand for sanitary wares fueled by the Public Health Act of 1848. To cope with this they opened further factories in Lancashire and the Midlands. In 1853 John Watts retired and the two companies merged to form Doulton & Company. In 1863 Henry joined the management committee of The lambeth School of Art. Henry slowly decided it was time for the company to spread its wings and make more decorative wares. To this end 100’s of students from the art school were employed by Doulton over the years. From these efforts Doulton went on to win many awards at national and international exhibitions. Henry Lewis Doulton who succeeded his father & in January 1899 Doulton & Co. Limited came in to being with young Henry as Chairman & M. Shortly after in 1901 King edward VII presented him with a Royal Warrant of Appointment & authorised the company to use the word ROYAL on its products. Between the wars the demand for stoneware products declined and despite producing much excellent work the Lambeth factory was closed in 1956 partly due also to the Clean Air Act that were introduced in London at that time in response to the Great Smog of 1952 which had caused the estimated deaths of 4,000 people and illness in a further 100,000 cases. Production carried on else where but Royal Doulton Limited went into administration on 5th January 2009 & is now part of WWRD Holdings Limited. Doulton will be remembered not just for there pottery but also for the social break throughs that were made by there links to the Lambeth School of Art offering employment especially to women and there treatment of employee’s. Also they helped improve sanitary conditons for the masses in the U. This item is in the category “Pottery & Glass\Decorative Pottery & Glassware\Vases”. The seller is “andrew_frost7r3b” and is located in this country: GB. This item can be shipped to United Kingdom, Antigua and Barbuda, Austria, Belgium, Bulgaria, Croatia, Republic of, Cyprus, Czech Republic, Denmark, Estonia, Finland, France, Germany, Greece, Hungary, Ireland, Italy, Latvia, Lithuania, Luxembourg, Malta, Netherlands, Poland, Portugal, Romania, Slovakia, Slovenia, Spain, Sweden, Australia, United States, Bahrain, Canada, Japan, New Zealand, China, Israel, Hong Kong, Norway, Indonesia, Malaysia, Mexico, Singapore, Korea, South, Switzerland, Taiwan, Thailand, Bangladesh, Belize, Bermuda, Bolivia, Barbados, Brunei Darussalam, Cayman Islands, Dominica, Egypt, Guernsey, Gibraltar, Guadeloupe, Grenada, French Guiana, Iceland, Jersey, Jordan, Cambodia, Saint Kitts-Nevis, Saint Lucia, Liechtenstein, Sri Lanka, Macau, Monaco, Maldives, Montserrat, Martinique, Nicaragua, Oman, Pakistan, Paraguay, Reunion, Turks and Caicos Islands, Aruba, Saudi Arabia, South Africa, United Arab Emirates, Ukraine, Chile, Bahamas, Colombia, Costa Rica, Dominican Republic, Guatemala, Honduras, Jamaica, Kuwait, Panama, Philippines, Qatar, El Salvador, Trinidad and Tobago, Uruguay, Russian Federation.