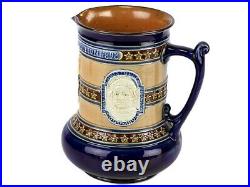 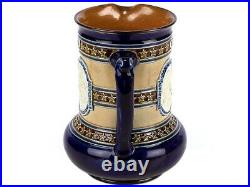 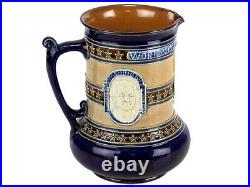 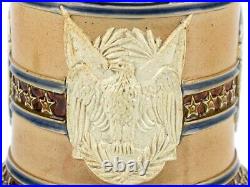 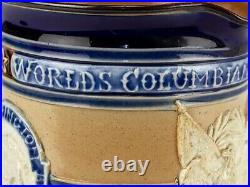 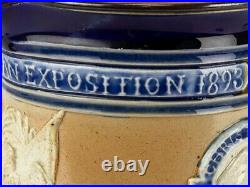 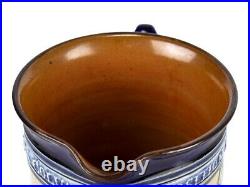 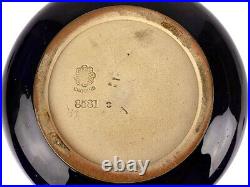 Parade Antiques and Collectables. C1893 Doulton Lambeth World Columbian Exposition Jug. A beautiful example of a c1893 (possibly a year earlier) Doulton Lambeth Stoneware pottery Jug celebrating the World’s Columbian Exposition of 1893. The jug features moulded relief portrait busts of George Washington and Christopher Columbus, on either side of the central cartouche which has the American Eagle backed by the American flags. There are also three horizontal rows of raised stars. A band at the top reads: WORLD’S COLUMBIAN EXPOSITION 1893 in raised white lettering on a blue glaze. There are multiple hallmarks on the underside including the Doulton Lambert mark with the interlocking D motif, England, and the number 8386. It has the handwritten EP signature for Emily Partington, as well as a d mark in the clay. The jug is in good condition with a small restoration to the spout. The World’s Columbian Exposition, also known as the Chicago World’s Fair and Chicago Columbian Exposition was a World’s fair held in Chicago in 1893 to celebrate the 400th anniversary of Christopher Columbus’s arrival to the New World in 1492. The centrepiece of the Fair, the large water pool, represented the long voyage Columbus took to the New World. Chicago bested New York City, Washington, D. Louis for the honour of hosting the fair. The Exposition was an influential social and cultural event and had a profound effect on architecture, sanitation, the arts, Chicago’s self-image, and American industrial optimism. Among the exhibits, were the carnival rides, among them the original Ferris Wheel, built by George Washington Gale Ferris Jr. This wheel was 264 feet (80 m) high and had 36 cars, each of which could accommodate 40 people. Size: 14 x 17 x 18.5 cm (5 ½ x 6 ¾ x 7 ¼ inches) Weight: 1128 g. Have a look at our other items. If you have any questions we are more than happy to help. _gsrx_vers_841 GS 7.0.16 (841). The item “C1893 Doulton Lambeth World Columbian Exposition Jug” is in sale since Friday, March 1, 2019. This item is in the category “Pottery, Porcelain & Glass\Stoneware\Doulton Lambeth”. The seller is “paradeantiques_online” and is located in Plymouth. This item can be shipped worldwide.